The planning application is currently with Dacorum Planning Department and will be considered at the Planning Committee meeting on 24 September 2020.

There were a number of questions raised at the consultation meeting which the team agreed to provide answers on:

1.) Crematoriums emissions, which include carbon dioxide, carbon monoxide, nitrogen oxide, sulphur dioxide, hydrogen chloride gas, hydrogen fluoride, mercury, vapour, carcinogens which are harmful to the local wildlife and people.
Will the filtration and abatement system comprehensively guarantee zero emissions/particles are released into the atmosphere? Or is there a tolerance level within the permit, if so what are the tolerance levels on each of the emissions/particles?

The filtration and abatement system, required for all new crematoria, significantly reduces pollutant levels below the requirements of PG5/2(12).

In addition to the requirements of PG5/2(12) the equipment will be fitted with a NOx reduction system, not currently included in the current legislation.

We can also confirm that crematorium chimney discharge heights are required, by legislation, to ensure ground level pollutant concentrations do not exceed legislated guideline levels.

The chimney design process will also account for the local existing pollutant background concentrations, as provided by DEFRA, to ensure that ground level ambient pollution guidelines are not exceeded.

2.) Any surplus heat is ejected to the atmosphere via an air blast cooler.
What emissions/particles will be released into the atmosphere? When this will be done, at night, will there be any noise, smell etc? Why can’t the surplus heat be stored or converted to energy which could be sent back to the grid, or can you only do this with an electric cremator?

The ABC will only function when surplus heat needs to be rejected from the process when the cremator is running within normal working hours.

The air blast cooler does not generate pollutant emissions and will not create local noise pollution.

Particulate emissions are reduced by filtration to very low levels, usually in excess of 90% reduction, and be less than the legislated burden to atmosphere.

Under normal operation the cremator there will be no visible emissions, smell or residue.

In cold conditions, such as winter mornings, there may be a small visible water vapour plume during start up. This is similar to that seen from a domestic condensing gas boiler or from car exhaust tail pipe.

Heat recovery to generate electricity from the cooling process would be of very low efficiency (governed by the laws of thermodynamics) and would be a very complex and expensive process producing little return and zero potential for export to the grid.

An electric cremator has no greater potential to generate electricity, and is a considerably greater consumer of electricity than a fuel fired cremator.

Heat would need to be rejected from the system when the thermal storage is at capacity, unless a significant local low grade heat user is available.

The crematorium heating and hot water will be heated from some of the surplus energy.

3.) Visual aspect. Concern with the existing gates. Living in a property which looks directly down the central avenue, needs to consider how will this be screened from Woodfield Drive? Need trees and shrubbery.

The existing gates are not part of the crematorium development. These have been constructed by the cemetery.

20 trees will be planted along the central avenue separating the cemetery / crematorium site and the houses to the north. These trees will aid in screening the crematorium from the Woodfield Drive residents.
The crematorium landscaping scheme will use bunds to screen and reduce the visual impact of the proposed building. The dark and mid-tone material palette used will blend the building into the surrounding landscape, reducing its visual impact further. This can be seen in the CGI views submitted as part of the planning application.

The entrance has been made with attractive brickwork piers and side walls and solid, good quality timber gates. Tree and shrub planting has recently been planted either side of the gate. When the gates are fully open, a view along the avenue would be towards the porte-cochere and not the main building, which is off-set and screened by the bunds and trees. The building is set back some 289m (948ft) from the closest rear garden boundary of Woodfield Drive and 309m (1,014ft) to the closest house window. To help put 1,014ft into context, this would be the equivalent of looking at the porte-cochere from across 3-full sized football pitches.

4.) Construction traffic will it come in and out of the same entrance?

This is typical of most construction sites. By only using a single entrance we retain more of the mature existing trees along the Bedmond Road and avoid losing trees unnecessarily.

6.) Wider area of traffic needs to be considered as well at the junction of levistock green junction and roundabout, and maylands green roundabout. Is it integrated and part of this scheme to remedy?

7.) Future technologies and the need to get to zero carbon by 2050. How will they be incorporated?

8.) There is no bus stop near the site – need to consider this.

There are bus stops both to the north and south of the site. The closest bus stops are 200m from the site which is half the acceptable accessibility distance of 400m.

An additional bus stop outside the site will cause traffic congestion outside of the site, reduce the visibility of traffic and encourage overtaking of stationary buses. A new stop less than 200m from an existing stop may also be refused by the bus operators as it may be deemed unnecessary.

More information on the proposals can be found in the following document (which was also shared at the meeting):

The full planning application with a detailed description of the scheme’s layout and detailed design can be accessed on the planning portal.

The planning application is currently with Dacorum Planning Department and will be considered at the Planning Committee meeting on 3 September 2020.

Click a thumbnail photo below to view the larger photo gallery… 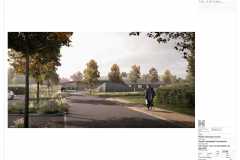 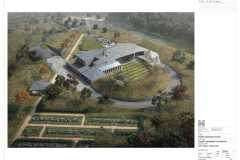 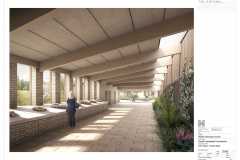 You can also view the more detailed CGI files below: